I wanted something with 4 seats as the children are getting into cars and want to come with me to car events etc.

Check out my new car day video below. I will share more detail and plans once I've had chance to properly look over it, now its been delivered: 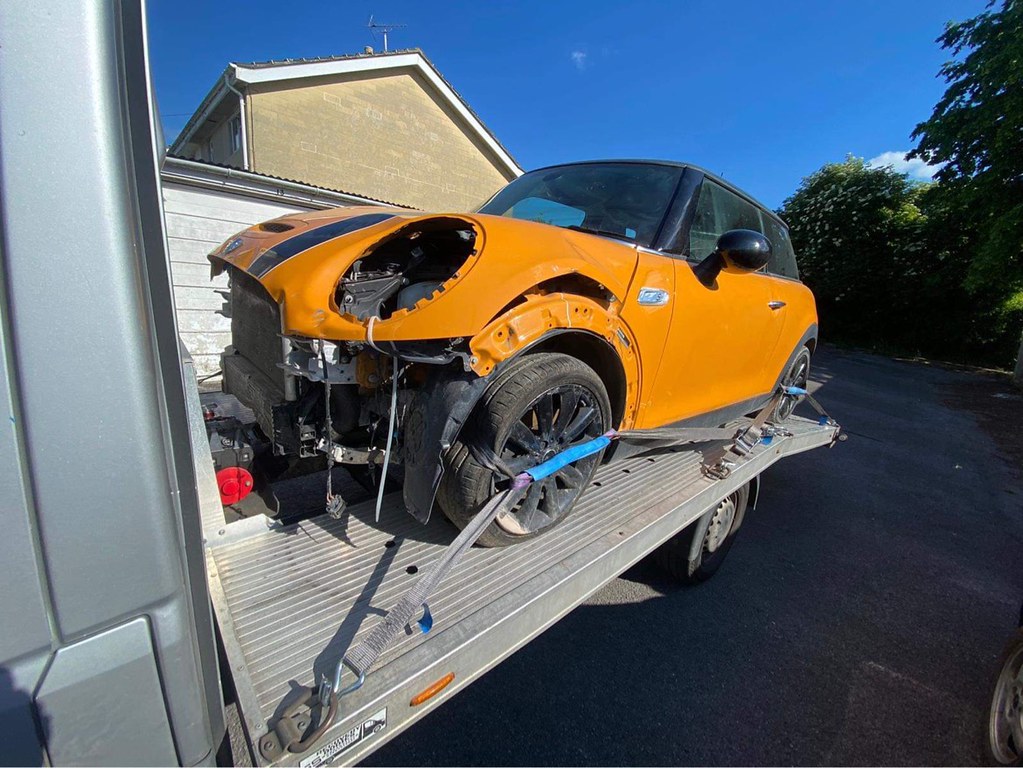 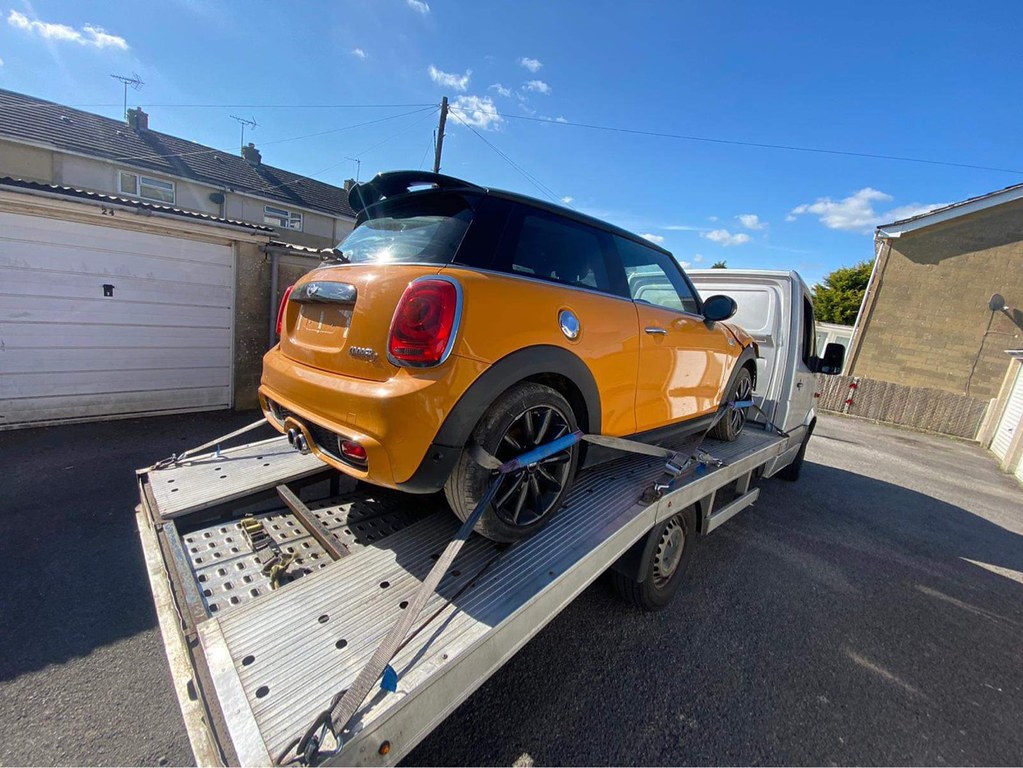 Sat next to my R56 it looks like a monster truck: 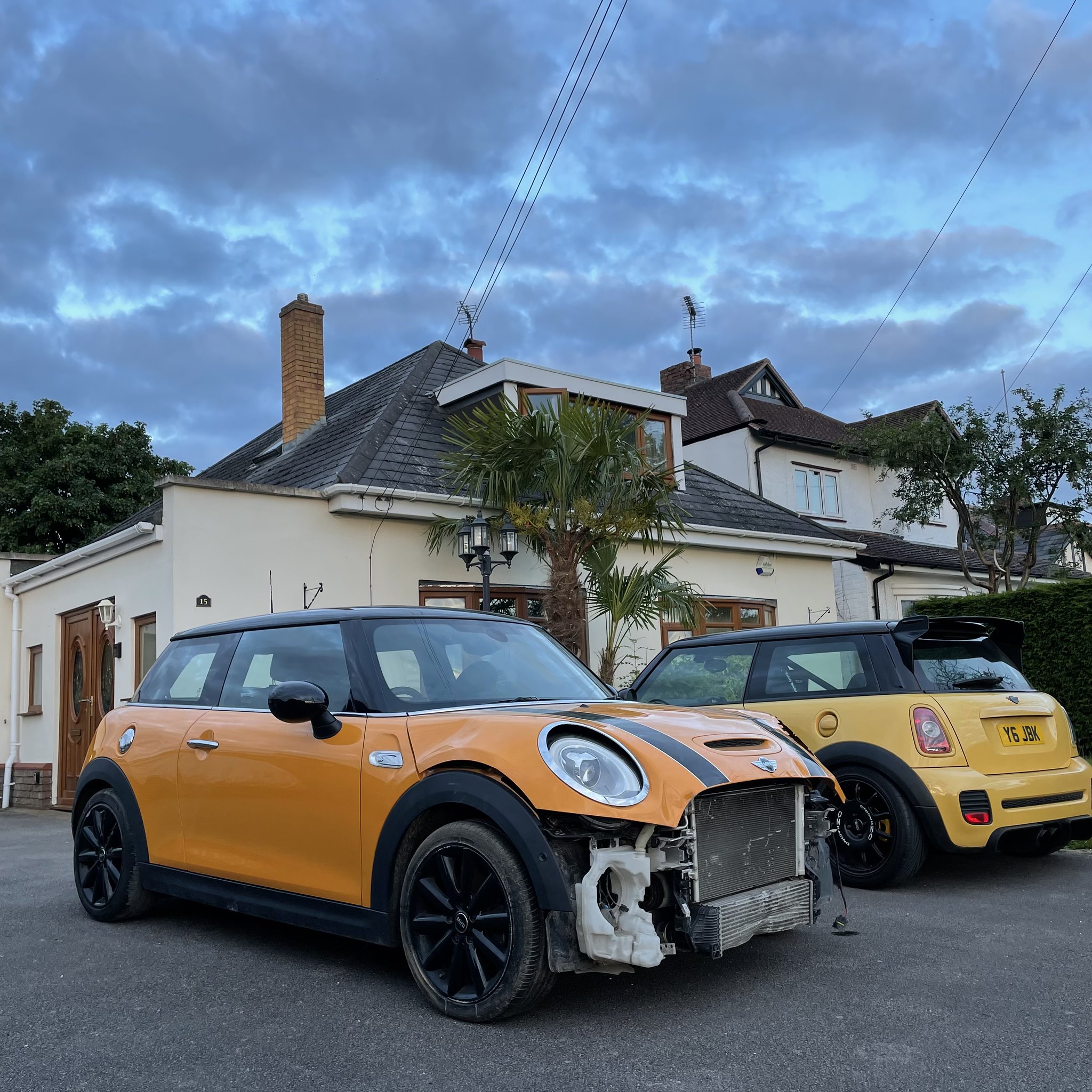 
A big order has also gone into Rybrook Stratford for most of the front end as used prices are the same or more than new which is crazy for most things.

· R53 Cooper S Owner
Joined May 10, 2008
·
396 Posts
While waiting for the parts to arrive I decided to start labelling up all the disconnected cables so I know exactly what goes where. This helped me to spot that someone had disconnected the washer bottle sensor and also that one of the front parking sensors was missing. I also started removing all the broken support pieces for the crash beam, the fans, the crash beam themselves and then the Airtec intercooler arrived so on that went as well:

Video below covers the initial investigation of the damage and what I tend to look out for with a damaged car:


Another delivery of bonnet related parts arrived today as I couldn't find a volcanic orange used bonnet and people want stupid money for used parts, most parts are actually cheap from dealerships like Rybrook Stratford parts department who have looked after me. That bonnet and bumper are going to the bodyshop later today to get them painted.

I also posted on Facebook mini groups asking if anyone wanted to swap my full leather interior for their JCW seats. And a very nice chap offered to do the swap, which we did this Saturday, so out mine came:

We then removed this and fitted my interior to his car:

The I threw the front seats straight in so I can reconnect the battery again, I have left out the rears for now, just in case the dent removal company I have booked need to get to the rear of the panel. Really happy with the JCW seats, what a difference it makes already to the interior

This is the dent in question, they seem confident they can get it out, so interested to see how they get on:

· R53 Cooper S Owner
Joined May 10, 2008
·
396 Posts
So the rebuild begins with lots of new parts arriving from Mini and starting to replace that front end:

Lö-Razor said:
Nice. I would love to Buy a F56, but Need To save money for My E46 and R56 build lmao. Looking forward for more content
Click to expand...

Thanks, I feel this is now going to replace my R56 build as I just have no faith in the N14 engines anymore.

· Registered
Joined 7 mo ago
·
39 Posts
Can you show pics from inside rear seat area near that dent? I have a dent there also would be good to see what it looks like from the inside


JimV said:
Can you show pics from inside rear seat area near that dent? I have a dent there also would be good to see what it looks like from the inside
Click to expand...

Hi a dent guy has looked at my car this week, there is more than enough access to get the dent out however the crease on mine is too sharp and he has said he can get the dent out but I will be left with a line. Therefore he recommends it being repaired with paint as he will leave a line and I will have to get it painted anyway. Therefore if you have a dent in a similar location you should be fine access wise.

Lö-Razor said:
Why do you have No faith in the N14 anymore?
Click to expand...

Its the 2nd gen engines in general to be honest. I tried buying a couple of Paceman's before the F56 and both had engine issues before I went to collect them so had to pull out of both. Then my current R56 has been playing up lately and I have sorted it but I just get the ick with them now.

· R53 Cooper S Owner
Joined May 10, 2008
·
396 Posts
So they came a checked it out, turns out that the crease in the middle of the dent is too sharp and I would be left with a line after the repair so he advised to get it traditionally fixed and painted.

Also turns out I missed some damage to the suspension, took it for a little test drive on and off the drive and got a stability warning and the wheel wasn't straight. So up in the air it went and I found pink pen on the rear lower control arms, both bent like a banana, the drivers side more than the passenger.

Picked up some replacements cheap on eBay. Next I inspected the fronts and although they look straight and no pink pen from the insurance company, I placed a metal ruler on the manufactured weak point, passenger side is straight, drivers side is bent. Looks like the car took a shunt from the front passenger side which may have forced both wheels on the drivers side to impact a kerb side on, bending both front and rear arms on that side. Again ordered a replacement front wishbone on eBay. Parts should be hear by Thursday and hoping they are a quick swap, rears seem easy enough front I haven't done before but can't be too bad, looks like a hand full of bolts.

I know what you feel about the N14 engines.

I have done the whole engine without the Piston Rings, even bought a new cylinder head With fresh camshafts, valve seals etc. And now the Piston rings startet to force blowby on the PCV SYSTEM. It leaks like 1l Oil on the Hose at the Valvecover. The HPFP leaks to i think or My Injectors. But its time to say Stop. I think the HPFP is down, because the Car Runs rich and the Car idles a Bit to much to get started. IT Need Like 10l Gas for 100 KM and that is to much. Other drivers get Like 7l for 100 km.

And Mine is just whining until 3000 rpm. I changed the belt, Waterpump, Pipe and Thermostathousing, Pulley of the belt and IT still whines.

Im thinking about selling the Car. It costed already over 3500 Euro and still have issues.

· R53 Cooper S Owner
Joined May 10, 2008
·
396 Posts
Gone for new parts, rear control arms are dirt cheap. Time to get the headlight tabs replaced as well as some simple fixes to things like the parking sensor wiring. I didn’t realise replacement headlight tabs was a thing. Saved me buying headlights which are £500+

· R53 Cooper S Owner
Joined May 10, 2008
·
396 Posts
Next up deciding what bodykit to go for, something different up front, already managed to get a set of JCW side skirts but not sure on a wing and rear bumper:

· R53 Cooper S Owner
Joined May 10, 2008
·
396 Posts
So the F56 got to its MOT and passed with flying colours. So it's time to start modifying it ready for MITP. I also got the aircon regassed as that all leaked out in the accident, now its icy which means I can now start using the car as its all fully road legal now:


This week I will be finishing the dechrome with OEM black belt line, black door handles and black side scuttles. I also have some LCI 2 front and read badges in black to fit.

I also started on the interior, I've gone with an LCI2 new look JCW steering wheel, which turns out is also heated so I need to work out how to retrofit the heating switch to make that work, but all the buttons etc work so its a straight swap and feels much nicer in hand

I have fitting videos for all these bits coming soon.


Loving the front end on this, time to start working on the rest of the car including the rear end and some suspension:

· R53 Cooper S Owner
Joined May 10, 2008
·
396 Posts
Finally another update, this time suspension. I re-used the airlift performance management from the R56 and bought new F56 Airrex struts. I am really impressed with the air setup on the BRZ and R56 so seemed a reasonable choice to go for it on the F56. Super easy to install and all hidden under the boot floor so I don't lose my boot.

· R53 Cooper S Owner
Joined May 10, 2008
·
396 Posts
Its been a while since I updated this thread, theres been a few niggles I need to sort and parts are piling up. I have front and rear JCW brakes to fit to this however they wont fit under the current stock wheels. So friday night I decided to start wheel shopping and came across a set of Autec Wizzard 17x7.5 et47 for sale with 215 40 17 tyres. They require 10mm spacers to clear JCW brakes but I already have some fitted. From the same seller I also picked up a part of Forge rear adjustable control arms, OEM black door handles and a stud conversion. But for now the wheels are on, I did a 7 hour return journey, I swapped the wheels in the dark on his drive so they didnt get damaged in the back of the car last night getting back at 1.30am but it was worth it. I wasn't sure of the colour at first but seeing it in the day light today, I love it.


Plenty of space for JCW brake behind those spokes:

Next up I need to get some new number plates made, Remus exhaust to fit, it needs to go to Millsys to get the brakes fitted and digital dash/new battery coded in and I also have the LCI2 rear bumper to get painted and fitted

Had to drop it off at the bodyshop:

Fitted, just need to sort the rear fog light wiring. Its not a straight swap as you have to change the brackets on the car but not too much work compared to the front end:

And if you want to know how to do it, check this out: