For the last 3 months we have the following symptoms after an oil overfill (I know, it was stupid):

- Low gear stalling (normally on first gear but very occasionally at 2nd) that comes and goes. It happens more often when the oil is low but sometimes still after the oil has been topped up. Sometimes I turn on the engine and can drive for hours with no problems at all but sometimes the car can be difficult to drive (stalling at junctions and occasionally at ~20mph in 2nd gear). I'll normally know as soon as I turn the engine on if I am going to have trouble as the revs will be dropping as soon as I start the engine (it sounds like it is trying to stall but never quite does at idle). Warming the engine up by revving it before I start driving seems to help elevate the issues with stalling.

- The car burns an excessive amount of oil and it is coming out of the exhaust (oil in exhaust and excessive smoke from exhaust when accelerating).

- The yellow engine comes on sometimes but after a driving for a while it goes back off. AA mechanic that came out a couple of months ago when the problem was particularly bad wrote the following in the error report: "Patrol found the following fault code/s:System : Engine control - 1LC / Motronic ME 17 Status :2A92 - O2 sensor (bank 1, sensor 1). Error Message : Faulty. Error present.Rough running , and engine management warning light on, i found dtc stored for inlet manifold pressure issues , i suspect this is due to a fault in the variable timing system , oil level correct but throttle response a bit lagging , i followed to a local garage for further investigation".

I didn't end up getting the car looked at by the garage the AA took me to as they refused to work with the warranty company. Instead I took it to another garage and they couldn't diagnose what was wrong. So that's why I'm turning to you! Does anyone have any ideas what the issue could be? Happy to answer any questions if there are any/

Thanks very much in advance for any help.
M

Joined Apr 8, 2017
·
9,110 Posts
1,4 engine eat the timing chains as rev higher to get anywhere it would seem seen load under 50k chains slipped on sprockets and damage, so first off with out any doubt the chain will need doing that should sort out post of it, as for oil using they are designed to do that low friction tech, what may have happened by over filling with oil could causes gummed up piston rings and making it worse, below link its called sea foam put ful can in the oil filler drive it around for 100 miles it will remove the gum up, but of rings are damaged then i t maywel make it worst either way you need to fix it 9 times from 10 this sorts them out, can also put some in plug holes and leave for 24 hours to decarbon it works a treat, used it on a 200k honda engine other day that was breathing like a train and eating oil totally cure it, after 100 miles drop oil and filter i would use 5/40 on it this will help with oil burning etc, also there is a known issue with thermostat housing and oil temp causing oil to get to thin, link also below for revised housing

Find many great new & used options and get the best deals for Sea Foam Motor Treatment Diesel Petrol Engine Injector Cleaner & Fuel Stabiliser at the best online prices at eBay! Free delivery for many products!
www.ebay.co.uk
below link for om unit dont be fooled by the cheaper chinese ones they are not good 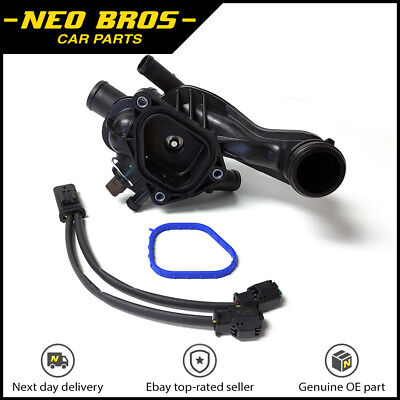